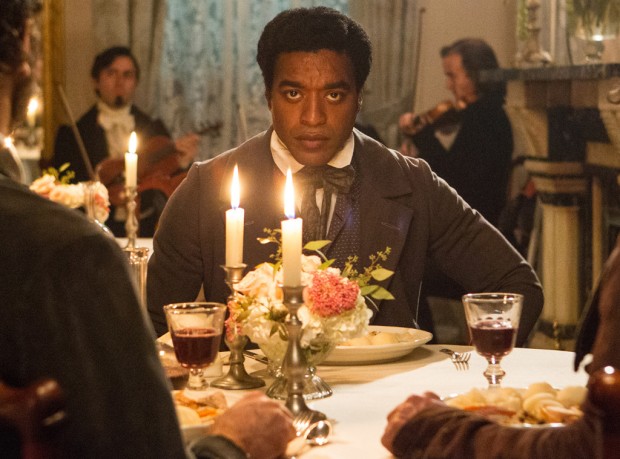 How quickly things die down once prophecy is fulfilled.

For nearly seven months–from the festivals to the guild awards–12 Years a Slave was part of the Best Picture buzz machine. Touted as the definitive winner by Vulture’s Kyle Buchanan after its TIFF premiere, 12 Years a Slave faced an uphill battle even though it never seemed to lose its place sitting atop the other contenders.

It was a Best Picture winner with a stigma that followed it all the way through to–and past–the finish line it crossed only two weeks ago. It’s a film made by black artists, starring black actors, about black characters, set during a time of intense racial tensions and that is at times what defined the film’s awards season run.

It’s a film that, by all means, was objectified as a film about race. That essentially made it “divisive” and “too intense” for some Academy members to watch. It was seldom a story of survival, of perseverance, of exemplifying the undying spirit of human will, and a prime showcase of the contingency of freedom which bolsters our nation.

I was guilty of this objectification. We are all guilty of it. The glimmer of hope at the end of a white-washed tunnel of Academy history came in the form of 12 Years a Slave. Atonement for the sins of the Academy’s past (primarily white voters, primarily white winners) seemed like it could all be over in an instant and, for a moment, it was; the black film won. The headlines were made, but at what cost?

Is the 12 Years a Slave win already feeling a bit hollow? Are we burned out on the churning of a self-serving machine that builds up a standard?

Not to say that the film is an undeserving bearer of the Best Picture torch. In many ways, it’s a fantastic film. It’s an important film in itself, and its mere release, box-office success, and popularity are the true triumphs. In the scope of Academy history, however, the film has already served its purpose, and will be defined for future audiences purely by its status as a touted “game-changer,” without changing much about the Oscar game at all.

We had publications projecting next year’s crop of potential nominees before Monday’s coverage of 12 Years a Slave‘s win was finished. Gone Girl, Unbroken, Into the Woods, and Foxcatcher became the focus. Have we grown so tired of the constructed narrative of race within awards season that we’re willing to let it go so very quickly after the self-made prophecy was actually fulfilled?

It seems that many Oscar bloggers and industry journalists alike were prepared for a 12 Years a Slave loss to Gravity.   In that scenario, the Academy would again become fodder for backlash, accusations of racism, and its perpetuation of the white heteronormative culture.

12 Years a Slave winning Best Picture merely cemented it as a film which came along at the right time. It was largely objectified for its racial aspects, but it’s a film that succeeded in a still predominantly-white, predominantly-male Academy who voted it into the spotlight on Oscar night. The industry pressure for the Academy to award the film seemed solely based on racial implications.

What people need to be advocating for, then, is a changing of the Academy structure. The fact remains that 12 Years a Slave won the heart of the white voter. 12 Years a Slave was the object of the white voter seeking to atone. We’re not talking about “white guilt” and compensation for slavery, but a more compartmentalized guilt (as a result of pressure from the industry) for a lack of diversity in the Academy.

Yes, a black woman–the first in its 86-year history–is currently the Academy president. Still, the Oscars are:

What a “divisive” movie like 12 Years a Slave winning Best Picture does, however, is not to cement the minority status amidst a traditionally “white” institution, it merely makes the crowd-pleasers like Gravity and Argo the underdog for next year’s race, because the old white men are still doing the majority of the talking, the majority of the dictating, and the majority of the voting.

In the same way 12 Years a Slave stood out as an “alternative” in this year’s case–which ended up being a positive–with the same Academy structure, who’s to say that the next black filmmaker who comes along won’t be objectified for the same thing, only with the opposite implications? Will the next film “about” race be given the cold shoulder, as 12 Years a Slave was so highly publicized as the definitive answer to the Academy’s issues with rewarding minority filmmakers?

It’s so easy to envision Academy members thinking that since another “black” film won, it’s unnecessary to vote for a new one. Just look at what happened to Kathryn Bigelow after she won the Oscar for Best Director for 2009’s The Hurt Locker. She was completely shut out of the Oscar race for Zero Dark Thirty, even though she’d made the most culturally-relevant, groundbreaking film of that year. She belonged in the Best Director race–on top of it, actually–but I fear that her being a minority in an industry driven by white men was met with the “been there, done that” voting mentality, and she was ultimately snubbed.

The Academy needs to start:

1) Collecting and releasing statistics on how its members voted including age, race, and gender demographics
2) Releasing a full roster of its members
3) Eliminate the preferential ballot

Each of these things would put pressure on the Academy to change its internal structure far more than it already has attempted to do. It has already made its desire to diversify its ranks very clear, as invitations to high profile non-white, non-male industry members (Lena Dunham, Ava DuVernay) were publicized last year, along with the aforementioned election of Cheryl Boone Isaacs as Academy President.

On one hand, 12 Years a Slave as a Best Picture winner does open up many doors to minority visibility in the industry. Still, it is audiences who have a say in the grand scheme of things. The standard of beauty is not created by the suits, its merely analyzed, accepted, and returned by the suits. The fantasy of filmic beauty is decided by those who choose to see and accept it. Pressuring people to vote for a film they might not have considered to be the true “best” of the year simply because it fits an overarching narrative of race in the Academy is unfair. It’s peddling race the same way the Academy has rejected it, though I believe the pushing and prodding of Oscar voters to “do the right thing” because “the time” had come for a “black” film to win is a more deliberate emphasis on race.

In the momentary spitfire of the pre-Oscar hype machine, perhaps 12 Years a Slave is an appropriate Best Picture choice. It represents so much of what the Oscar race is about. It’s more of-the-moment than anyone thinks. While we’re looking to it as a vessel for change, it could very well usher in the exact opposite, and be the default “race” choice for many years to come.

After all, it took 86 years. One film isn’t going to change much.