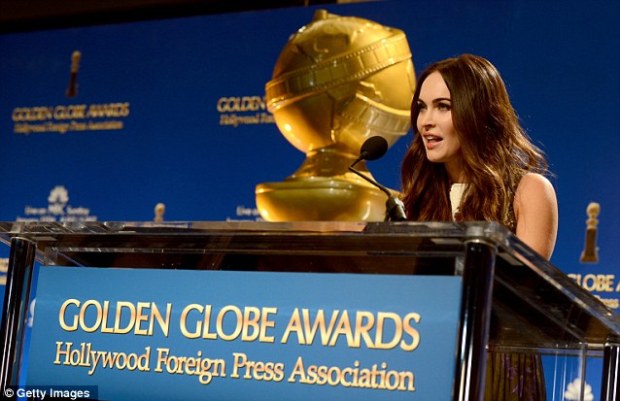 While nearly anyone introducing Taylor Swift prior to any performance will spontaneously combust for now having to utter the words “Golden Globe nominee” prior to her name, The HFPA surprises everyone this year with a set of nominations that are not only going to change the state of the Oscar race, but also are of justifiable presence.

Brian Austin Green did not have to broadcast himself moving the lips and miming the voice of a Megan Fox who refused to get out of her bed this morning, as the actress was awake and well as she announced the nominations for the 70th Annual Golden Globe Awards alongside Jessica Alba this morning. The Hollywood Foreign Press Association has a tendency to nominate big names over big talent, even going as far as to shove films into incorrect genres (The Tourist in Musical/Comedy two years ago) simply because A-list, crowd-pleasing stars populate them. In true form, they didn’t disappoint in that category this year; Nicole Kidman made her second surprise round on the Oscar watch front this morning as she was nominated again by a major precursor organization for her supporting performance in The Paperboy. Lee Daniels’ first post-Precious film was met with lukewarm reviews and a defeatist release schedule, and was never a part of the Oscar conversation until yesterday, when the Screen Actors Guild nominated Kidman.

It’s too soon to tell whether or not Kidman’s role will build enough buzz to keep up with the pack, but her edging out the likes of Maggie Smith (Best Exotic Marigold Hotel was thought to be a surefire contender for many Globes) could very well lead to an Oscar nomination.

Other surprising Globes drama includes the snub of Anna Karenina in all major categories although it oozed with standard Globes flair, Robert De Niro’s omission for his work in Silver Linings Playbook, and Beasts of the Southern Wild receiving a big fat zero in the nominations column. Anna Karenina wasn’t expected to make much of a splash at the Oscars, but the Hollywood Foreign Press has nominated Knightley in the past for her roles in lavish period pieces, one (Atonement) under the direction of Joe Wright, who also directed Anna Karenina. De Niro will still receive an Oscar nomination, and it’s safe to assume Christoph Waltz edged him out slightly here, but it’s good to see Quentin Tarantino’s latest effort, Django Unchained, pick up some late-season momentum heading into the Oscar race, a race which many had deemed its chances slim after advanced screenings began earlier this year.

Beasts of the Southern Wild, on the other hand, is a much more puzzling case. It’s generated enough buzz to be more than just “looked over,” but it failed to make much of a box office dent anywhere outside the United States ($1.2 million in the UK was its strongest run), and is expected to be nominated in at least two major categories at the Academy Awards (Best Actress for little Quvenzhane Wallis, and Best Picture). The case reminds me of Terrence Malick’s Tree of Life and its lack of nominations at the Globes last year. Both are currently my #1 film of the year (this supports my theory that the HFPA is against me), and both are enigmatic to a certain extent, stylistically superior to their competition, and both made under $15 million at the U.S. box-office, cumulative totals under $55 million worldwide.

Following a New York Film Critics Circle win, Rachel Weisz’s performance in The Deep Blue Sea picked up another major nomination, this time for Best Actress – Drama, from the HFPA. The film had an extremely limited release in the United States, but is widely available on Netflix as I write this. Her performance is tender, vulnerable, but never approaching the grating hysterical levels many actresses succumb to in roles like this. What excites me most is the building momentum for Jessica Chastain’s work in Zero Dark Thirty, which is quickly making the Best Actress race a neck-and-neck bloodbath between Chastain and Jennifer Lawrence. Chastain was largely overlooked for her work last year (she appeared in six fantastic films, each performance Oscar-worthy in its own right), but she has a serious shot at taking home the Best Actress Oscar come February. Although not in the same genre category as Lawrence’s nomination, a Golden Globe win (which she’s poised to do, none of her competition has generated as much precursor buzz than she, save for maybe Marion Cotillard) will give Chastain a veritable shove to the front of the Best Actress line.  It’s also great to see Naomi Watts make it into the category for her work in The Impossible, a Spanish production (with primarily English-speaking cast) that lost a majority of its Oscar buzz as other, higher-profile pictures pushed and shoved their way to the front of the line. Watts is long overdue for an Oscar win, so let’s hope this year can at least garner her a nomination (this push will certainly help).

On the television side of things, HBO’s fabulous Girls receives two nominations (Best Actress for Lena Dunham, Best Comedy Series) and is poised to upset Modern Family just before its second season begins in January. Game Change, “that Sarah Palin movie,” picked up a handful of nominations as well, making HBO a veritable force on both dramatic and comedic fronts this year.

The least surprising nominations in television come in the form of Homeland’s nods in the lead acting and overall series categories. No surprise as the show continues to prove itself as the best on contemporary television.

All in all, the HFPA earns a solid B this year for their nominations. They’ve effectively stirred the pot without looking completely ridiculous, as they’ve sacrificed integrity for star power in nominating A-list superstars in silly unrelated categories in the past. HFPA, I tip my hat to you this year, but rap you on the nose with it on the way down for leaving Beasts out of the equation.

Best Original Song:
“For You” from “Act of Valor”
“Not Running Anymore” from “Stand Up Guys”
“Safe and Sound” from “The Hunger Games”
“Suddenly” from “Les Misérables”
“Skyfall” from “Skyfall”