High profile productions aren’t just made in the Steel City these days; they’re also headlining Pittsburgh’s very own Three Rivers Film Festival, which made its 31st debut tonight with screenings of some of this Oscar season’s buzziest titles. But, that doesn’t stop a little brokedown Pittsburgh “flair” from seeping into the mix. It’s hard to imagine a  projector merely “slipping” off its axis mid-screening, or a festival showrunner announcing the dispensing of sandwiches and cheap wine after the show (simply because “well, uh, because it’s opening night,” he so eloquently concluded) at Telluride, Toronto, or Sundance. But alas, these things happen. You must constantly remind yourself (the cutesy mishaps might do that for you) that this is merely Pittsburgh charm at its finest.

As a city sprawling in artistic evolution, there’s undoubtedly a comfortable amount of room for the film industry to nestle itself firmly in Pittsburgh’s bosom. The Dark Knight Rises and Adventureland are a mere sampling of the big-name studio productions filmed here over the course of the past two years. Pittsburgh is making a name for itself as a Hollywood of the East Coast, and its priority film festival should reflect that.

Around 7:00 PM, small crowds of people dotted the sidewalks of Liberty Avenue as the historic Harris Theater prepped Rust and Bone for its Pittsburgh debut. After screening in competition at Cannes earlier this year, Bone leads an impressive trifecta of Oscar bait goodness headlining Pittsburgh’s two-week long festival. Joining the film on opening night were Silver Linings Playbook and Beware of Mr. Baker, playing at the Regent Square Theater and the Melwood Screening Room, respectively.

The night intensified as Rust and Bone screened, however, with audience members responding audibly (gentle sobbing, jeers of disgust) to the French-Belgian co-production starring Marion Cotillard in a role that surely makes her a worthy contender in this year’s already crowded Best Actress Oscar race. The performance is a thing of fantasy, a fantastical fruit plucked from the highest branch of cinematic perfection. 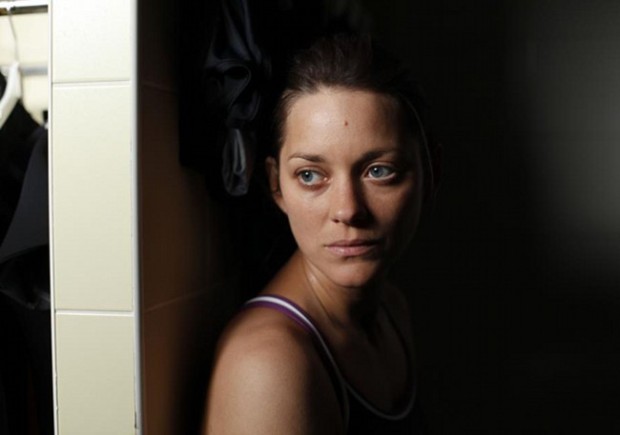 The film itself is a masterful emotional powerhouse, telling the story of two people entwined in a delightfully tragic dance of magnetic attraction. Stephanie (Cotillard) is a killer whale trainer treading water amid a stagnant love life; Ali is a twenty-something drifter running away from a murky past filled with one-night stands, an ex-wife, and the liveliest souvenir to show for it all; a sprightly five-year old son. Together, the pair feed off what they lack but are able to find within each other; Stephanie’s inherent ability to harness and control what’s “larger” than her and Ali’s ruthless path to self-gratification don’t meet with fireworks, but rather a slow melding together—sometimes messy and dripping with unsightly bits—of a beautiful relationship that’s as imperfect and alluring as the people who comprise it. It’s hard to call Rust and Bone an optimistic film, seeing as its protagonists suffer far more than they prosper, but it is a celebration nonetheless. Rust and Bone finds beauty in pain, delicately savoring the jagged edges of experience learned from life-altering tragedies instead of offering quick-fix, unrealistic solutions to unexpected hurdles.

Opening night sets the tone for the days (in this case, weeks) to come, and the Three Rivers Film Festival will screen pictures such as Holy Motors, Compliance, and a score of this year’s competitors for the Foreign Language Oscar; a dazzling high note hopefully crescendoing to a roar by the festival’s end. Although it’s hard not to chuckle at the inclusion of a low-brow “Pittsburgh Dad”-based production playing the same field as Oscar frontrunners. That’s Pittsburgh for you.

While filmmakers Q&A’s, receptions, and other standard film festival razzle-dazzle are expected, something tells me Pittsburghers will be pleased simply with a comfy chair, a working projector, and a film of any kind playing overhead.

More updates as the festival goes on.